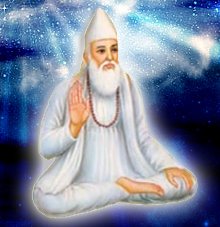 Kabir is a very important figure in Indian history. He is unusual in that he is spiritually significant to Hindus, Sikhs, and Muslims alike. Kabir openly criticized all sects and gave a new direction to the Indian philosophy. Kabir touches the soul, the conscience, the sense of awareness and the vitality of existence in a manner that is unequalled in both simplicity and style.

It is for this reason that Kabir is held in high esteem all over the world. Another beauty of Kabir's poetry is that he picks up situations that surround our daily lives. Thus, even today, Kabir's poetry is relevant and helpful in both social and spiritual context. Following Kabir means understanding one's inner self, realizing oneself, accepting oneself as is, and becoming harmonious with one's surroundings.

Sant Kabir -1398-1518
Sant Kabir is considered to be one of the greatest poets as well as mystics ever born in India. He believed that human beings are equal and being one with God is the ultimate aim of every individual. His love and devotion towards the Supreme One clearly reflects in his poetry. The Holy Guru Granth Sahib contains over 500 verses by the great saint, Kabir. The verses or dohas of Guru Kabir are still read by people with awe and admiration. Read on to explore the biography of Sant Kabir further.

Early Life
As per the life history of Saint Kabir, he was born in 1398 AD. It is said that he was found floating on a lotus leaf in a tank in Benaras by a Muslim weaver. The weaver took the vulnerable child under his care and following the traditional manner, gave him the name of 'Kabir', meaning 'the great one'. Even at a young age, Kabir displayed enormous spiritual talent.

Meeting his Guru
Kabir always wanted to become a disciple of Ramanand. However, since he was a Muslim, it was next to impossible for him to get initiation from a Hindu. So, he took recourse to a trick. Ramanand daily went to the bathing ghat for his pre-dawn ritual ablutions. Kabir lay on the steps of the ghat in such a way that Ramanand stepped on him. Shocked at this incident, he chanted 'Rama! Rama!'. Kabir said that since he had received teachings from him, in the form of the words 'Rama! Rama!', he was Ramanand's disciple. Impressed with the intelligence of Kabir, Ramanand took him as his disciple.

The Philosophy of Sant Kabir
Sant Kabir believed in the Vedantic concepts of atman. He always advocated the Impersonal Aspect of God (Nirguna) and therefore, was against idol worship. As per his view, all human beings are equal and the societal caste system that is so widely prevalent in our country is fallacious. He said that true guru is the one who can be attained through direct experience. The common ways of realizing God, like chanting, austerities, etc, are worthless.

Kabir Teachings
Kabir was a man of God, a lover of the Lord. Having attained the highest form of spiritual experience, which is God-realization, he was fully competent to guide others on the path. Spirituality was a way of life for him. Kabir’s main concern was that whatever he did it was to seek Divine Grace. The aim of saints is this merging of soul with the Lord, absorption of the lover into the beloved or the flame into the Flame.

Kabir longing for the Lord was the longing of a lover for her Beloved. Kabir has described himself as the ‘bride of the Lord’, ‘the wife of Ram’. He addressed the Lord with many names like, Ram, Krishna, Govind, Madhav, Murari, Keshav, Viththal, Sarangapani, Madhusudan, Jagannath, Allah, Karim, Khuda, Rabb, Rahman, Rahim, Sahib but he used these names for the one God. He declared that his affection is not of these personal Gods.

The Lord of Kabir is immutable, permanent and perfect. That which is permanent and changeless is true and that which is born and dies is false. The Supreme Being cannot be described in human language. He has no limits and all human faculties including the mind have limitations. The mind gets its knowledge from the senses, how then can a human being describe Him or His nature. Imagination cannot fully comprehend The Divine, and the little one may know of Him cannot be described. All philosophies are incomplete attempts made to realize God through analysis, intellectual understanding and human deductions.

peaking on incarnation, Kabir says that one who is born to a human father through a human mother cannot be perfect, anything of this world is imperfect. The one beyond is He who neither begets nor is he begotten, He neither has a father nor a mother, he neither comes nor departs..

This point between the eyebrows has been described by saints with different names, it is widely called the third eye, the divine eye, the dark mole by some muslim adepts, in the Adi grants as ‘ the door of the home’, the tenth door’, ‘the road home’, ‘the gateway of liberation’.The human body made of the five elements has nine doors to it, but it is within the tenth door that the Lord lives. The eye center, is the point from where the soul has descended and diverged into the nine portals of the body. This is the point where the soul must converge to start it’s journey home. This starting point is a narrow and fine one. Jesussaid “ enter in at the straight gate ..straight is the gate and narrow is the path which leads to life and it is but a few who find it”. Kabir has described this center as the narrow door to salvation a tenth of a mustard seed.

According to Kabir, soul, the wife is involved in the nine houses of the external world and therefore cannot reach her Husband’s abode, which is the tenth house within. When one enters here one enters a world of light and spiritual beauty.

As Christ says “when thine eye be single, thy whole body is filled with light”.

kabir is one lord of all universe. he is not a sant.