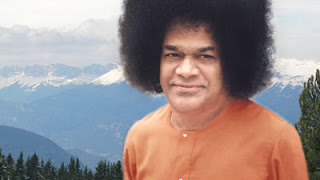 Who Is Sathya Sai Baba?
His body is of medium height; His skin is dark as typical of all Indians; He wears orange monastic robes. A particular feature of His appearance is a shock of bushy, dark, curly hair.
But this is just His body, just a tiny part of Sathya Sai Baba…
In reality, He is completely different. He is the Oceanic Universal Consciousness connected with the material body. And in any part of the planet where it is necessary, It appears as a tongue of non-material Divine Flame, which rises above the surface of the Earth for kilometers*. The tongues of this Flame emerge in every place, where He is helping His disciples. It is enough just to call Him.
Yes, this is It — the Divine Fire, Which makes sinners tremble with fear, but does not have the quality of heat for righteous men, Which is the Subtlest of the subtle, Which is Tenderness, Bliss, Divine Love for all who became like It and entered It! Or It enters them and fills them with the Love of God.
Souls, which He touches in such a way, can hear His precepts, instructions, pieces of advice. They can do it if they, as consciousnesses, are pure and subtle enough, if they are capable of attuning themselves to the perception of Him, forgetting about the problems of the material plane.
“There are 3 stages of concentration,” Sathya Sai Baba says. “At the first stage, you receive My messages in the form of mental waves. At the second stage, you can hear My voice. And at the third, you can hear and see Me. If you succeed in the purification of the consciousnesses, you move from stage to stage.
“… When the mind is motionless and silent, one can hear the voice of God. Anyone who is able to purify the mind from anxiety, agitations, and thoughts can attune themselves to the voice of God inside.” [4].
… Sometimes He takes on another appearance — more condensed, of just several meters in height. In this case, even people who have not purified themselves as consciousnesses to the necessary level are able to see Him.
Yet always — in any appearance — He can be recognized by His distinctive feature: a magnificent head of hair!
And let nobody think that while He is communicating, for example, with the author of this book, the rest of His disciples are left without His attention and supervision. No: at each moment from His Abode as many tongues of His Fire come as necessary for satisfying the needs of all! Because He is an integral Part of the Primordial Universal Consciousness, and His Power is unlimited!
He speaks about Himself in such a way: “I am the Sai Baba of Shirdi come again; then, I was mostly engaged in preparing the meal; now I have come to feed you all with the strengthening, purifying repast!” [4].
“I came to restore the Straight Path to God!” [1]

The Teachings of Sathya Sai Baba