Spiritual Ideals for a Fulfilling Marriage

If you seek the One Friend behind all friends, true friendship can be established in all of your relationships—familial, fraternal, marital, and spiritual.

Friendship is vital in a marital relationship. Sex alone will not bring a couple closer together; in fact it will all too soon throw them apart if the higher instinct of true love and friendship is not predominant. When sex is made the most important part of marriage, the couple lose interest in one another when the initial blush of sensual gratification pales. Those who do not discriminate between true love and sense attraction are disillusioned again and again.
People who want to marry should first have to learn to control their emotions. Two people placed together in the arena of marriage without this training battle worse than opponents in a World War! Wars, at least, come to an end after a time; but some marital partners engage in combat throughout life. You would think that in a civilized society people should know how to get along, but few have learned this art. A marriage should be nurtured on high ideals and the wine of God’s inspiration; then it will be a happy and mutually beneficial union.
Once in Boston I was invited to speak at the silver wedding anniversary celebration of a supposedly ideally happy couple. The moment I entered their home I felt something was wrong. I asked two trusted students to quietly observe the couple throughout the evening. They told me that when the husband and wife came before others they smiled and addressed each other sweetly, “Yes, my dear,” “Of course, my dear”; but when they thought they were alone in the kitchen or pantry, they fought like anything. 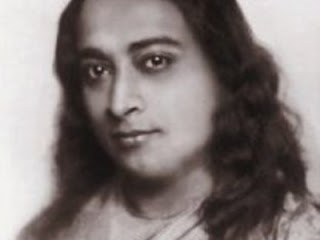 So I talked with them: “Why do you behave like this? I feel great inharmony in this home. There is a lot of iron in this silver wedding.” At first they were offended. But I pursued the matter. “What do you gain by fighting all the time?” I gave them a good talking to. They approached me later and asked my forgiveness. I told them, “You stay together just because of your reputation as an ideal couple, but I want you to truly live that way, for your own happiness.”
One’s ideals should be lived in behaviour, thought, and speech. If two people come together and their moods are wrong, they become insincere with each other. When deception creeps in, the marriage is “on the rocks.” Why this hypocrisy? Such mistakes should be prevented from the very beginning.
By Paramahansa Yogananda

The Yoga of Jesus: Understanding the Hidden Teachings of the Gospels

Email ThisBlogThis!Share to TwitterShare to FacebookShare to Pinterest
Labels: Marriage, Spiritual Ideals for a Fulfilling Marriage