Osho – Enlightenment has no language 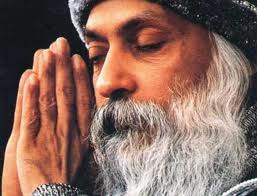 Osho – Once you start falling in love with somebody, although in the beginning it is only his language, his poetry, his graceful assertions, his mysterious words … slowly, slowly you come closer and closer. Words are forgotten and the person becomes more and more important, his presence becomes more and more tangible. You can almost touch it. His silence slowly starts reaching within you, creating a communion — not a communication.

There is a story about a Sufi mystic, Jalaluddin Rumi, who has been loved by Sufis the most. He is the only Sufi mystic who has been called mevlana: master of masters. And he was certainly a master of masters.
A caravan was passing through the desert, and in a castle in the desert Jalaluddin Rumi had his campus, where seekers from all over the Middle East used to come to see him. The people in the caravan thought, “It is a good place for the night’s rest. We and our camels are all tired. And moreover, it is a good chance, just out of curiosity, to see what is happening with this madman, Jalaluddin Rumi, who attracts strange people from faraway countries. And we don’t see any point in it. He looks to us a little mad, but they call him a master of masters.” So just out of curiosity they stopped under the trees and went into the castle to see what was happening.

Jalaluddin was teaching. His teaching consisted of pure poetry; he would sing a song. They heard his songs — they looked like utterances of a madman: irrelevant, unconnected. Beautiful words, but saying nothing … strange sentences. When you are hearing them you feel great; when later on you think about them you find nothing, your hands are empty. They left in the morning.

On their second trip they again passed by the side of the castle, and they again stopped to see how much the madness had progressed. There was only Jalaluddin Rumi sitting, and nobody else.

They said, “So all those idiots are gone. This is strange — very strange progress of the disciples. Where have they disappeared to? They have all left.”

Seeing nobody there, they took courage, approached Jalaluddin, and asked him, “It is not good to disturb you, but we cannot resist our temptation to ask — what happened to your disciples?”

Jalaluddin looked at him — the man who was asking — and the crowd behind him, the whole caravan. He said, “I have been watching you. The first time you stopped I was speaking to my disciples, just preparing them so that they can sit in silence with me. The next time you passed, they had become mature enough, they were sitting in silence with me.

“This time you have come, they have all gone to spread the message. They have ripened, they have arrived at the space they had been searching for. Now they have gone to catch hold of other mad people. I will have to begin again when new people come. I will talk, and when they are ready just to enjoy my presence in silence, then I will sit in silence with them. And when they have come so close that their heart and my heart have become one, I will send them to fetch other mad people who are in need of me.”

Enlightenment has no language, Milarepa. But enlightenment finds ways, even without language, to convey the essential message. Even language can be used as a device, but it is not a communication of the experienced truth. That communication will happen only in communion.

Nanak traveled all over India and outside India — the only great Indian mystic who ever went outside India. And he had only one disciple with him in all these travels. He went to Sri Lanka, he went to Mecca and Medina in Saudi Arabia, far and wide — and he was walking. All that he used to do was just to sit under a tree and his disciple, Mardana, used to play on a certain musical instrument. He would play music and Nanak would sing a song. And there was such beauty in his song, and in the music of Mardana, that even people who did not understand their language would come there and sit close to them.

After the music was finished, Nanak would sit silently. And the people who had become enchanted with the music, without understanding — because it was not their language … a few would leave, but a few would sit because now his silence had also become a tremendous magnetic force.

He was an uneducated man and he used only a villager’s language — Punjabi. But he managed to create an impact on almost half of Asia. Without any language, he managed to make disciples. I am reminded of a small but tremendously valuable incident.

Near Lahore there was a campus of Sufi mystics, very famous in those days — five hundred years ago. People used to come from far and wide to Lahore for that mystic gathering. Nanak also reached there, and he was just taking a bath outside the campus when the chief Sufi heard that he was there. Neither he understood Nanak’s language, nor Nanak understood his language; but some way had to be found. He sent one of his disciples with a beautiful cup full of milk, so full that even one more drop of milk could not be contained in it. And he sent that cup of milk to Nanak.

Mardana could not understand: “What is the matter? What are we supposed to do? Is it a gift, is it a welcome?” Nanak laughed and he looked around, found a wildflower, and floated it in the milk. The wildflower was so light that it did not disturb the milk, and nothing came out of the cup. And he gave the signal to the man to take it back.

The man said, “This is strange. I could not understand why this milk has been sent, and now it has become even more mysterious: that strange fellow has put a wildflower in it.” He asked the chief Sufi, his master, “Don’t keep me in ignorance. Please tell me what the secret of all this is. What is going on?”

The chief mystic said, “I had sent that cup full of milk to tell Nanak, `Go on to somewhere else; this place is so full of mystics, there is no need of any more mysticism. It is too full, just like this cup. We cannot welcome you; it will be unnecessarily crowding the place. You go somewhere else.’ But that man has managed to float a flower in it. He is saying, `I will be just like this flower in your gathering. I will not occupy any space, I will not be a disturbance in your gathering. I will be just a beautiful flower, floating over your gathering.’”

The Sufi mystic came, touched the feet of Nanak and welcomed him — without language; nothing was said. Nanak remained their guest, every day singing his songs, and the Sufis were dancing, enjoying. And the day he left they were crying. Even the chief mystic was crying. They all came to give him a send-off. Not a single word of language was exchanged — they had no possibility of any communication. But a great communion happened.

Enlightenment has no language, Milarepa, but enlightenment is capable of finding ways of conveying its rejoicings, its blissfulness, its truth, its love, its compassion … all that is great in human experience — the highest peaks of consciousness.

Email ThisBlogThis!Share to TwitterShare to FacebookShare to Pinterest
Labels: Enlightenment has no language, Osho Fruits