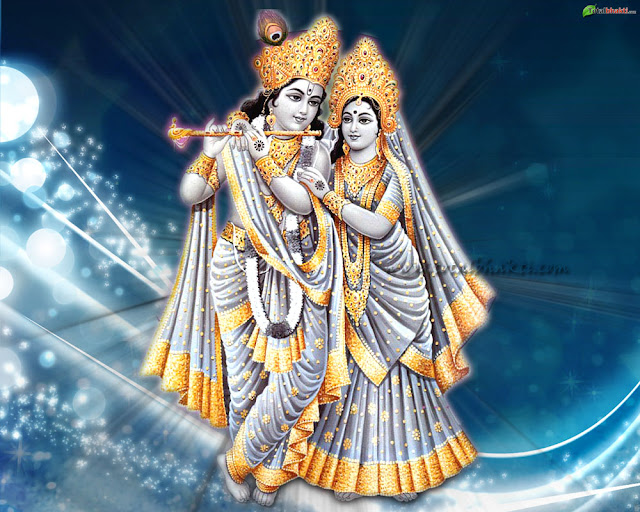 In 3228 BCE in Mathura, India, a child was born who was destined to reshape the spiritual and temporal destiny of mankind—Sri Krishna. In his 125 years of life, Sri Krishna made an indelible impression upon mankind's collective consciousness—re-educating the world about devotion and dharma as well as the ultimate reality. His life was a model for people in days past, the modern world and surely for those in ages to come. Seeing Krishna as a perfect personification of divinity, to this day hundreds of millions of people pray to him, chant his names, meditate on his form and try to put his teachings into practice. His life has inspired a treasure house of poetry, music, painting, sculpture and other fine arts. As Amma says, "His glory is unsurpassable. His story is a source of joy and inspiration for people from all walks of life."


A child, a brother, a charioteer, a warrior, a disciple, a guru, a cowherd, a messenger, the beloved of the gopis... Throughout his life, Krishna enacted so many roles—the whole time never forgetting that they were just that, roles, and that his true nature was eternal, ever blissful consciousness. In this way, he was able to remain detached and thus perform flawlessly, never allowing the smile to fall from his face. This, Amma says, is perhaps his greatest teaching.

"There have been very few who have been able to rejoice both in victory and in defeat," Amma says. "Sri Krishna is one who celebrated both. That is why he was always able to give a big smile. He took birth with a smile on his face, lived with a smile, and left his body with a smile. The message that he conveyed through his life is that we should make life full of laughter."

Krishna's life was so full, it would be impossible to recount it all here. It is told primarily through Srimad Bhagavatam, Garga Samhita, Visnu Purana, Brahmavaivarta Purana, Mahabharata, Harivamsa and several other puranas. However, here are some of the broad strokes.

Krishna, in fact, took birth in a prison cell. A sage had told his egoistic uncle, King Kamsa, that he would be killed by his sister Devaki's child. So Kamsa imprisoned Devaki and had each child she bore murdered. However, Devaki, and her husband, Vasudeva, finally were able to sneak one child off to safety. This was Sri Krishna. They sent Krishna off to Vraja, where he was raised by a foster mother, Yasoda. It was in Vrindavan, one of the villages of Vraja, that Krishna won the hearts of the gopis, the cowherds of the village. "By spending all his time with the gopis of Vrindavan—playing with them, joking with them, stealing their butter and milk, etc—what he actually was doing was stealing their hearts," Amma says. It is from this that Krishna was given the name "Chitta Chora" [one who steals the mind].

Kamsa sent many assassins to kill Krishna, but none of them were able to do so. And in the end, Krishna returned to Mathura and killed Kamsa, restoring dharma to the land.

In fact, Krishna never returned to Vrindavan. The pain of separation was unbearable for the gopis. It drove their minds into a fever pitch, wherein their every thought was of Krishna. Through this, their minds were purified and they slowly became able to see their Beloved in all things: in the trees, in the rivers, in the mountains, in the sky, in all people, and animals—even in their own selves. This was the realization that Krishna had intended to bring about within them from the very beginning.

The devotional fervor Krishna created in the gopis is perhaps best exemplified by the rasa-leela dance, wherein each of hundreds of gopis perceived the eight-year-old Krishna to be dancing with them alone. Amma says, "The rasa-leela did not take place on the ordinary plane of the senses, the way people today interpret it. During the rasa-leela the gopis experienced the beatitude of the jivatma merging in the Paramatma. Because of their divine love, the Lord appeared to each of the gopis. With his power, he blessed each gopi with a vision of the Self."


Radha is said to have been the most devoted of the gopis. Theirs was the highest love—a love to inspire mankind forward on the path to God. Amma has even said: "Krishna's lifting of the Govardhana Mountain as a child was not the real miracle; the real miracle was the gopis' love for Krishna."

The next major role in Krishna's life was as a friend to the Pandavas, five devoted and dharmic brothers whose kingdom was usurped by their 100 half-brothers, the egoistic and adharmic Kauravas. In the eventual war between the two, Krishna served as the charioteer of the Pandava Arjuna. And it was also to Arjuna that he advised the 701 verses of The Bhagavad-Gita (the centerpiece of The Mahabharata). It is the Gita that stands as Krishna's most important gift to the world. In fact, some people believe that the whole purpose of Krishna's birth was to deliver this "Song of the Divine." It comprises Krishna's advice to Arjuna on the cusp of the Mahabharata War. The Gita delivers the essence of spirituality in a way that the common man can understand. As the great Swami Chinmayananda often said, "With the Gita, Sri Krishna took the knowledge of the Upanishads down from the Himalayas and into the marketplace." Here was a true handbook for life delivered by the Lord himself. Amma herself says, "One studies the Gita to become Krishna."

"Lord Krishna's teachings are suitable for everyone," Amma says. "He didn't come just for the sake of a particular section of society. He showed everyone—even prostitutes, robbers and murderers—the path toward spiritual progress. He urges us to live according to our true dharma, to remain steadfast in it, and thus advance in life toward the ultimate goal."

Krishna's instructions were not just for monks. He advised everyone to his capacity. His instruction to Arjuna, in fact, was to remain in the world, performing his dharma. "His life was a perfect example of how to remain unscorched in the midst of worldly fire," Amma says. "It is like keeping a piece of chocolate on your tongue without salivating. ... He shows how to succeed in life while remaining in the midst of obstacles. The Lord doesn't advise us to turn away from our relationships in order to attain Self-realization. He explains that we should be free from all attachments while still maintaining loving relationships and upholding our family responsibilities."

Lord Krishna left his physical form at 125 at the hands of a hunter. But he died as he was born and as he lived—with a beatific smile upon his face. In fact it is said that his final act was to bless the hunter who had accidentally shot him. Such was his love.

Amma says, "Throughout his life, Lord Krishna had to face different crises that arose like waves, one after the other. Even then, not once was his countenance clouded by sorrow. He faced every difficulty under the sun, but there was no place for sorrow in Sri Krishna's presence. He was the embodiment of bliss. In his company everyone rejoiced, forgetting all else. In his presence they tasted the bliss of the Self. Even now, after all this time, doesn't the mere thought of him fill us with bliss?" 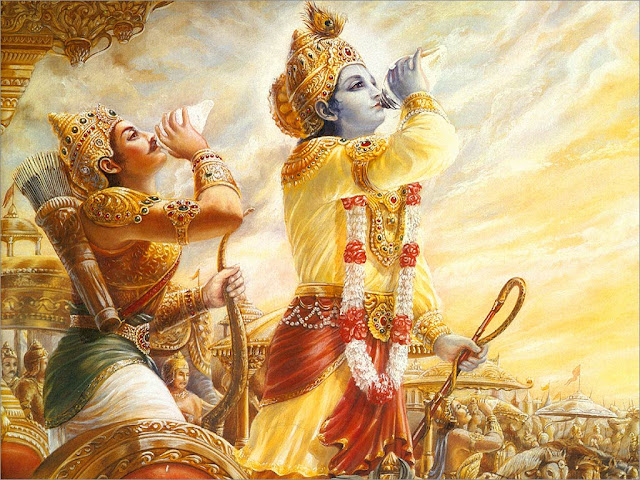 
"It is true that the mind is restless and difficult to control. But it can be conquered, Arjuna, through regular practice and detachment. Those who lack self-control will find it difficult to progress in meditation; but those who are self-controlled, striving earnestly through the right means, will attain the goal."

"For certain is death for the born... And certain is birth for the dead... Therefore over the inevitable Thou shouldst not grieve..."

"On action alone be thy interest... Never on its fruits... Let not the fruits of action be thy motive, Nor be thy attachment to inaction."

"Knowledge, the object of knowledge and the knower are the three factors which motivate action; the senses, the work and the doer comprise the threefold basis of action"


"Whatever I am offered in devotion with a pure heart - a leaf, a flower, fruit, or water - I accept with joy."

"They, whose mind and intellect are absorbed in the Self, who remain firmly attached with the Self, who have Self as their supreme goal, whose sins have been destroyed by the knowledge, do not take birth again."